Getting to Hawaii..And the World. Best Values!

Barbi and I have been feeling sticker SHOCK at airline prices from Salt Lake City to Honolulu lately.  Fuel prices continue to drive up the cost of Jet-A, and thus flights from here to there.  I have a work associate who has a son serving as a missionary in Hawaii (I Know! Tough gig, huh?), and they would like to return there with him, after he is finished with his service time.  I mentioned to him that airfare from Utah is running between $939 and over $1,200 per person. GAG...Gulp!  Then he stated something I have always known.  "For that kind of money, I might as well cruise there and back."  Uh, YEAH!

I know this might not be for everyone, especially those who don't have to penny pinch.  But if you have 2 weeks, why not consider a round trip Los Angeles cruise to Hawaii?  Right now, in April 2013, published fares on Princess.com range from $1,695 for an inside to $2,595 for a balcony cabin.  you catch a quick $250 flight to LA, board the ship, and relax.  Two weeks of pure bliss!  No 6 hour flights (Both ways), in a cramped coach seat, where the comfort was left in the terminal.  Here, you can drink a Mai Tai. Get a Tan.  Catch a show.  Watch a movie on the big screen outside.  Visit 4 of the Hawaiian Islands and Ensenada Mexico.  I am telling you, there is no more comfortable and value based way to visit Hawaii!

So, when considering travelling to a distant land, consider cruising there.  I have a friend who does not like to fly, so they are boarding a cruise ship this month in Australia and cruising to Vancouver, British Columbia.  Travel between New York and London in 6 days. (No Jet Lag There)  Ft. Lauderdale and Rome in 14 days. Ft. Lauderdale and Manaus Brasil.  Los Angeles to Santiago Chile.  Vancouver to Beijing China. No matter the destination, a cruise ship can get you pretty dang close.


We Are Here For You
Posted by Focus On Fun Travel at 7:57 PM No comments:

Keeping up with Cruising

The cruising industry (Not Tom Cruise) continues to grow and keep up with the ever changing world we live in.  And though there have been "Incidents" over the last year, more and more people are embracing the excellent way to travel that we know as a CRUISE!  Unpack Once! Visit many places without having to repack, go through an airport, schedule multiple hotels, etc.  In the last 5 years, because of cruising, Barbi and I have visited 29 countries, seen things we only dreamed of, and made long lasting friends. 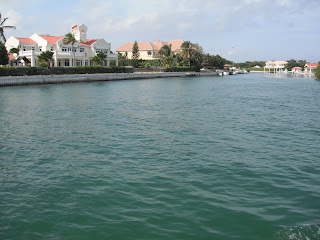 I mentioned Norwegian Breakaway and Bermuda in the news briefs above.  Some people don't want to be "stuck" on a ship for 7 days.  Well, Here is an excellent adventure!  On Norwegian's itinerary, you spend 2 days sailing from New York to Bermuda, then you are "Camped" there for almost 3 full days.  Take your time and explore every nook and cranny of this pink sand wonder.  Don't feel hurried to get back to the ship! When you are tired, come back to the ship to sleep.  It is there for you. Next day, enjoy! When you depart, there is only the evening and the next full day at sea, then back in New York City. Easy access to anywhere in the world from there!

We Are Here For You﻿
Posted by Focus On Fun Travel at 1:37 PM No comments: