I have been a Smart Phone user with Verizon now for about 2 years.  Last year I held in my hand a Blackberry Storm when we set sail for Europe on a transatlantic cruise on the Crown Princess.  Before leaving, I called Verizon to explore my options.  What was offered was an unlimited data plan that would cover me while on the ship and in Italy, Spain, France, and Great Britain (Gibraltar).  For $25 for the month, I thought that was an awesome addition.  And it was!  Other than some initial problems after setting sail, I was able to stay connected.  This was for internet and email only, not voice calls.  Voice calls reverted to $2.50 per minute while on the ship.  Texts were $.05 to receive and $.50 to send.

Now, a year later and now holding an Android, I find that Verizon has thrown out that unlimited plan, and replaced it with a plan that has limited possibilities while in port, and NO options while on the ship. NONE! Nada! ZIPPO! 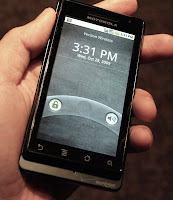 So, If you are considering a cruise and want to stay connected, plan and budget accordingly.  Here are Verizon's rates for while you are in port in Mexico and most places in the Caribbean:

I know what you are thinking, what constitutes a "MB" (Megabyte).  That is tricky and virtually impossible to predict (Remember...anything that follows "Virtual" is a Lie).  Emails with text only would be measured in KB (Kilobyte), and you can go a long way with 25MB.  If they have an attachment or pictures, those will quicky take up your allotted MB amounts.  If you use your web browser, you will again start eating it up.  Youtube?  Forget about it!

You can turn off the data portion, and keep your phone for emergency phone calls, which can be very reasonable compared to some cruise ships.  At $2.49/min, that is a bargain compared to as much as $6/min for using the ship board phones.  Watch out for those text messages though.  Remember that you will be charged international roaming rates of $.05 to receive and $.50 to send.  Cheap way to quickly communicate, but can quickly add up if you have automatic text alerts from facebook, twitter, or the Amber Alert system.

Important!!!  Before you leave, make sure you contact your cellular provider to alert them you are traveling out of the country.  Most of the time, you will need to update your device.  Talk to them about global plans available to you.  Remember to make sure they include the cruise ship if possible in what ever plan you can choose from, along with the countries you are visiting.  Don't forget to remove the plan when it is appropriate.