What's new on the water?

This year will usher in many exciting enhancements in the cruise industry, which will also bring with it, movement in technology, luxury, and grand achievements.  15 new cruise ships are scheduled for delivery this year. 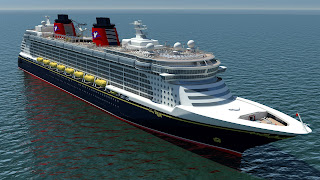 Today we saw the christening of the Disney Dream, which is the first new Disney cruise ship in more than a decade.  But as with all things Disney, prepare to be amazed and entertained.  One of the best inclusions of technology is the virtual port holes on inside cabins.  HD cameras mounted on the outside of the ship, show a real time view of ocean.  Now your inside cabin has become an outside cabin.  Cool, huh?  Add to this the AquaDuck, a water coaster, and fun has just taken a new level.  She will call home port in Port Canaveral Florida.  Check it out...and don't forget to include some time at the Magic Kingdon since you'll be there. 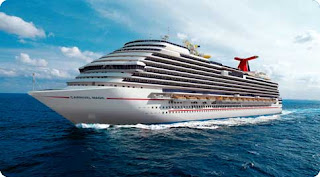 May 1 will debut the Carnival Magic.  With innovations never seen before, like a suspended ropes course, outdoor weight lifting area, dual water slides, and a 500 gallon dumping bucket, Carnival's mantra of "All for Fun, Fun for All" will deliver on that promise.  She will debut in Europe, but will call home Galveston Texas.

In July, we all celebrate a new Solstice Class ship, the Celebrity Silhouette, with its home port in Bayonne, N.J.  It will be different from its sister ships with the Lawn Club Grill, Private alcoves, and an art studio.  The Caribbean will be even more exciting with this new ship.

If you have ever considered a river cruise through some of Europe's most storied and romantic water ways, 7 of the new ships this year are made for traversing in elegant style.  Be on the look out for new ships through AMAWaterways, Viking, Avalon, and Uniworld.

For small luxury cruising, Oceania, Ponant Cruises, and Seabourn will be adding new ships to spoil you rotten and take you places that the large vessels cannot go.  Here you will be treated like a king and not be part of a vessel that hosts thousands, but hundreds instead.  There is something valuable about that kind of intimacy, that everyone should experience.

This is why cruising is so much fun, and always getting better.  Besides new ships coming out yearly, existing ships are in a standard rotation of being refurbished and improved.  As an example, Princess Cruises, in the last few years, has been revamping and improving their fleet of ships by adding Movies under the Stars, The Sanctuary (An adults only area) and updating interior areas, in addition to launching new ships in 2013 and 2014.

In our experience, you can almost never go wrong by crusing as a vacation.  check it out!